When he left home for good at the not so ripe age of 16, LaMelo Ball had a bushy mop of hair, braces on his teeth and no idea where his unconventional path would eventually lead. In a suitcase that’s now well worn, he packed sneakers, a basketball and hope, and needed all three, not necessarily in that order.

Three years later, the shoes famously changed brands, the basketball is getting delivered to teammates with a slick flick of the wrist and the hope is beating loudly here in what can be classified as the most sensational NBA rookie season of any in 2020-21.

He’s bringing all that back Thursday in his return to Los Angeles, where he’ll play against the team of his boyhood dreams, where he’ll be showcased once more to a once-skeptical basketball audience that is now fully believing the hype.

It seems we’ve known about LaMelo for 20 years even though he’s just 19. That’s what the social media age can do — along with a boisterous father who’s addicted to family promotion — and when you mix in an NBA-or-bust journey by a high school kid that traveled through three countries and would deter the faint of heart, it explains everything.

Above all, LaMelo seems built for what he’s doing already for the Hornets: Playing entertaining basketball, showing unteachable court sense, proving unshakable in tense moments of games and turning a historically-ho-hum franchise into must-watch TV, which might be the most remarkable rabbit-out-of-the-hat of all.

Seriously: Aside from LeBron James and the Los Angeles Lakers, who’ll host LaMelo in his homecoming at Staples Center, there might be only five or six teams that attract more curiosity than the Hornets.

It’s mainly because of LaMelo, who’s averaging roughly 16 points, six rebounds and six assists in just 28.7 minutes per game. He leads all rookies in assists as well as steals (1.6). Although built like a 6-iron, his height (6-foot-6) often catches opponents and observers off guard and, aided by a quick-jump, enables him to play bigger than he appears around the rim. There is also unexpected praise for his shooting: LaMelo brings a quirky push-release — apparently it runs in the family — yet his efficiency is an impressive 37.7% from deep and 45% overall.

The real talent is passing and command of the floor. Only a blessed few players bring a special sense of anticipation, for where their teammates are headed, for where the defense lurks. LaMelo has the guts and dexterity to throw behind-the-back passes while running almost full speed, and a knack for tossing soft lobs that catch leaping teammates at the precise time. He’s already comfortable at spotting the angles and knowing the width of passing lanes, the tools that allow for playmaking and creativity.

“Growing up, with my pops having me play up (in age), I could always see passing lanes and certain stuff that I always saw at a young age,” Ball explained.

Speaking of that: His start as a basketball professional required a GPS. After his sophomore year he left Chino Hills — where he and his brothers helped the local high school go undefeated and win the California state championship in 2016 — because his father became embroiled in a disagreement with the coach. It was probably well and good. LaVar Ball had big and bolder plans for the boys and their future. LaMelo, the youngest, became the main test tube baby when Lonzo left for college and the NBA while LiAngelo fell through the basketball cracks.

After leaving the L.A. suburbs, LaMelo played professionally in Lithuania, then rerouted back to the States to finish his high school career at an academy in Ohio, then boomeranged back to pro ball in Australia and closed the door on college basketball.

While his blueprint raised eyebrows here and isn’t the norm for teenaged players, it’s rather typical of young elite teens in Europe. Luka Doncic was raised in a basketball academy, signed his first contract at 13, left home shortly thereafter and made his pro debut at 16. Those formative years playing against men is largely credited for Doncic being so skilled and wise to the nuances of the game in the NBA. 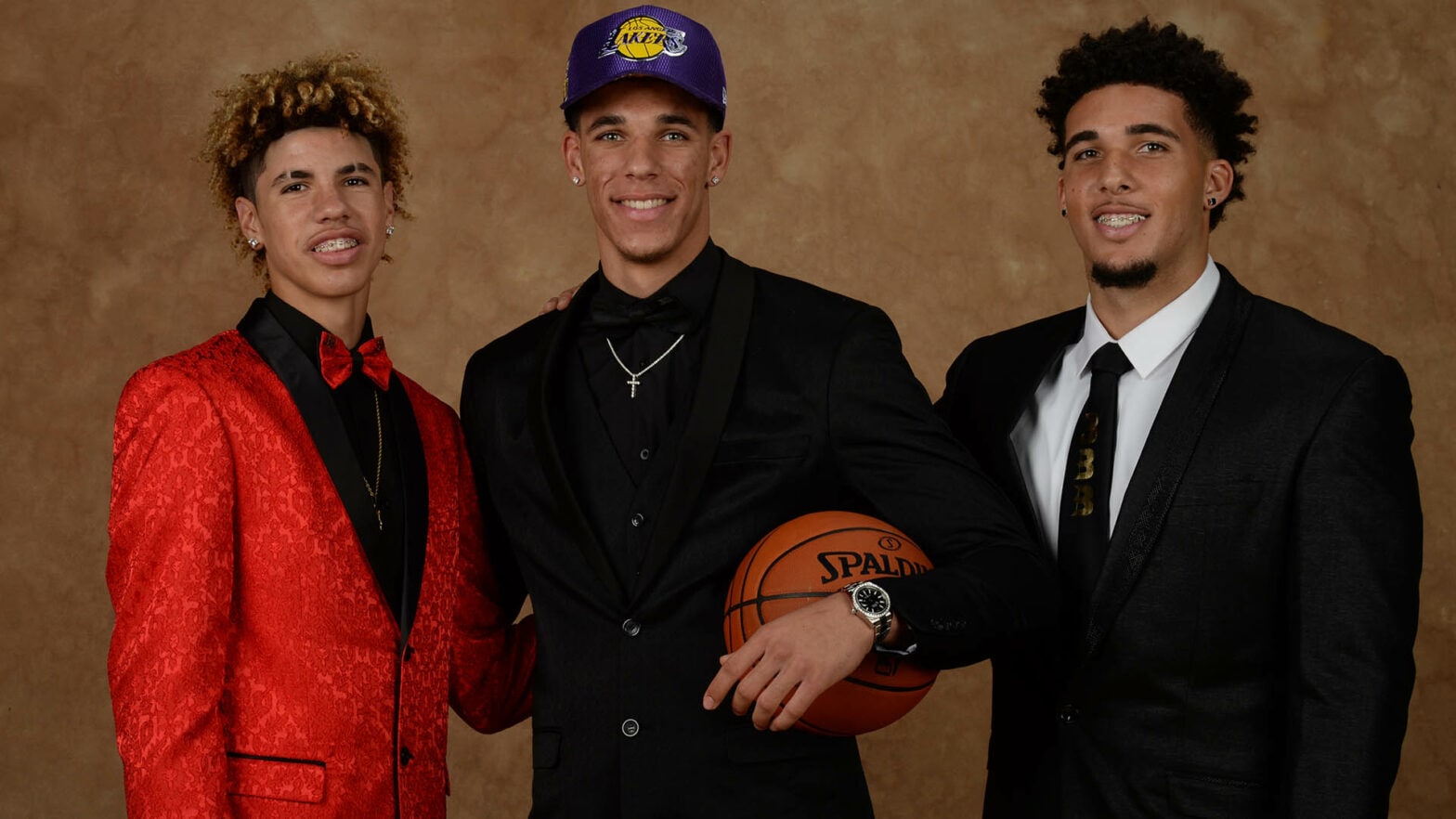 LaMelo Ball (left) took a different route than his brother Lonzo (middle), who was drafted by the Lakers four years ago.

LaMelo therefore was prepared similarly. When he left for Australia, he was on his own, away from family, accompanied only by his current business manager and mentor, Jermaine Jackson, a former college player who coached him in Ohio.

“I was just enjoying life,” LaMelo said of those globetrotting adventures.

Once he arrived in the NBA, as the third overall pick, the Hornets suspected almost immediately that LaMelo was possibly ahead of the curve compared to others taken in last summer’s Draft.

Gordon Hayward said: “You could tell in training camp, just in the way he handled himself and knew the game. He blended in and looked like he belonged.”

Michael Jordan, the team owner, mentioned recently how LaMelo “has exceeded our expectations” and is obviously thrilled, given the Hornets’ checkered Draft history.

The Hornets brought LaMelo along slowly, spoon-feeding him minutes initially and bringing him off the bench for the first several weeks. When his production in those minutes soon became obvious and also key to the Hornets winning games — they’re right in the thick of the playoff race in the East — LaMelo could no longer be denied a meatier role.

He’s now treated with great affection by the highlight shows on networks, cable and the internet, which again isn’t foreign to him, given his background and place in the spotlight, thanks partially to his father. This time, though, the attention is deserved and demanded for a rookie who has hit the ground running (and passing) without a stumble yet.

“I just came in with the mindset that I would work hard and try to be a better me,” he said.

Soft spoken and careful in interviews, LaMelo said: “I feel like I learn day by day, game by game, practice by practice. I feel like every day you can take that as a learning school and just learn something from the day. Even if it’s something big or something very small, I feel like you’re always learning.”

He said he wasn’t moved by the upcoming first-meeting with LeBron, who was LaVar’s favorite player before his sons reached the NBA.

“I mean, nah,” Ball said. “I grew up a little different. Not really on basketball like that. So, not really.”

He added that his idol was his father, not any current or former player, and therefore said: “I was big on family … I go to every game with the same approach — going in to try to get a win.”

That said, LaMelo has adopted one of Carmelo Anthony’s trademarks — poking his head after making a big shot — and exchanged jerseys with Anthony when the two met for the first time, so there is a degree of admiration for some influential stars, which is common among rookies.

Maybe the best feeling for LaMelo is one of stability. There’s a 99.9% chance that he will not change cities, teams and countries next season — assuming Jordan doesn’t come down with a bout of craziness and, let’s say, trades the franchise’s meal ticket.

So, it’s safe, then, to buy instead of rent. After hopping around globally in search of a good game and some seasoning, teenaged LaMelo Ball finally has a home, and it’s the one he always craved, the one his father always told anyone who would listen: The NBA.

“I thought about that after I left Australia,” he said. “Instead of not knowing, I now know where I’ll be. That was big.”