Kai Havertz scored his first Premier League goal since October as Chelsea got their top-four push back on track with a comfortable 4-1 win at Crystal Palace.

Chelsea responded to their stunning 5-2 home loss against West Brom by beating Porto 2-0 in the Champions League in midweek and they built on that performance in fine fashion.

Havertz has struggled to reproduce his Bayer Leverkusen form at Chelsea but was instrumental in lifting the Blues back above Liverpool, 2-1 winners over Aston Villa earlier on Saturday, and into the Champions League places.

The Germany international ended his drought in the eighth minute and then teed up Christian Pulisic a minute and 42 seconds later to give Chelsea command, which was furthered through Kurt Zouma’s header. 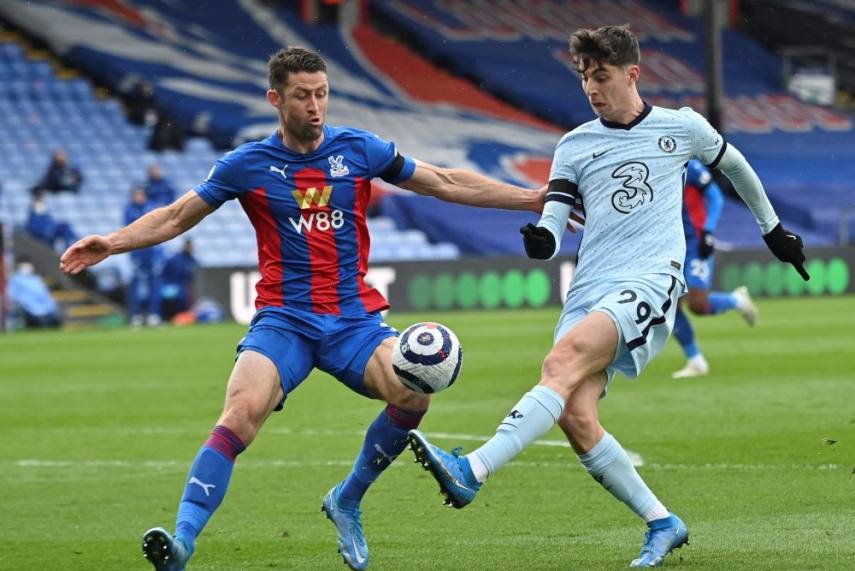 Christian Benteke reduced the deficit in the second half before Pulisic had the final say with his second 12 minutes from time.

Vicente Guaita sharply denied Pulisic from Mason Mount’s cross but within 12 seconds the Palace goalkeeper was picking the ball out of his net after Havertz ended his near six-month wait for a league goal with a wonderfully measured finish into the bottom-left corner.

The exquisite placement of Havertz’s strike rendered Guaita helpless and he was soon undone by the power of Pulisic’s left foot as he collected Havertz’s pull back and rifled into the roof of the net from point-blank range.

Brimming with confidence, Havertz went close to sublime second when he produced a deft touch to lift Jorginho’s long ball over the head of Patrick van Aanholt and shot on the half-volley, only to see Guaita repel his effort with a fingertip save.

The third goal did arrive in short order, however, as Zouma towered over Gary Cahill to meet Mount’s excellent free-kick delivery with a powerful header, the Premier League’s top-scoring defender registering his fifth of the season.

Another excellent Guaita save was required to deny Mount a deserved goal and Zouma would have had a second if not for a goal-line clearance by Van Aanholt.

Chelsea took their foot off the accelerator somewhat in the second half, and Palace took advantage when Benteke headed in Jeffrey Schlupp’s left-wing cross.

Guaita again prevented Havertz from doubling his tally but could not stop Pulisic from doing so as the tucked home Reece James’ deflected low cross to round off a superb showing.

What does it mean? – Tuchel’s Blues back in the groove

The defeat to the Baggies smacked of an aberration rather than a harbinger of a costly slump from Thomas Tuchel’s men, and they were back to their best in south London.

Havertz and Pulisic quickly put any thought of another shock reverse to bed and Tuchel should sleep soundly ahead of the second leg against Porto in Seville, with Chelsea having returned to the form that has become the norm under the former Paris Saint-Germain boss.

After scoring his first league goal since the 3-3 draw with Southampton at Stamford Bridge, Havertz produced the performance of a player with the weight lifted from his shoulders.

It was his first Premier League game with a goal and an assist at the 23rd attempt. Havertz also hit the target with four of his five shots and his passing accuracy in the opposition half was an impressive 88 per cent.

Two goals behind inside 10 minutes, Palace did not threaten a response until Benteke netted with their first effort of the game. The second half was better, but this was a display reflective of a team safe from relegation with nothing to play for.

– Palace have lost each of their last seven Premier League games against Chelsea – only against Tottenham (nine consecutive matches between September 2015 – September 2019) have the Eagles lost more games consecutively versus a specific opponent in their Football League history.

– Chelsea are yet to lose on the road under Tuchel in the Premier League (P6 W4 D2) – the only Blues manager to avoid defeat in his first six away games in the competition was Felipe Scolari (unbeaten in first 10).

– Pulisic has scored more Premier League goals against Crystal Palace than against any other side (4), while the only Americans to score more than Pulisic (13) in the competition are Clint Dempsey (57) and Brian McBride (36).

– All four of Mount’s Premier League assists this season for Chelsea have been for headed goals from set-piece situations, with three of those being scored by Zouma.

Chelsea will look to move into the last four of the Champions League by completing the job against Porto on Tuesday before an FA Cup semi-final with Manchester City next Saturday. Palace are not in action again until an April 26 meeting with Leicester City.

Raheem Sterling gets ENGALND off to winning start at Euro 2020